The abundance of Juncus effusus (soft rush) and Juncus conglomeratus (compact rush) has increased in coastal grasslands in Norway over recent decades, and their spread has coincided with increased precipitation in the region. Especially in water‐saturated, peaty soils, it appears from field observations that productive grasses cannot compete effectively with such rapidly growing rush plants. In autumn–winters of 2012–2013 and 2013–2014, a four‐factor, randomised block greenhouse experiment was performed to investigate the effect of different soil moisture regimes and organic matter contents on competition between these rush species and smooth meadow‐grass (Poa pratensis). The rush species were grown in monoculture and in competition with the meadow‐grass, using the equivalent of full and half the recommended seed rate for the latter. After about three months, above‐ and below‐ground dry matter was measured. J. effusus had more vigorous growth, producing on average 23–40% greater biomass in both fractions than J. conglomeratus. The competitive ability of both rush species declined with decreasing soil moisture; at the lowest levels of soil moisture, growth reductions were up to 93% in J. conglomeratus and 74% in J. effusus. Increasing water level in peat–sand mixture decreased competivitiveness of meadow‐grass, while pure peat, when moist, completely impeded its below‐ground development. These results show that control of rush plants through management may only be achieved if basic soil limitations have been resolved.

Cover crops are included in cropping systems in order to achieve various ecological benefits. In stockless organic cereal systems in Scandinavia, nitrogen is commonly supplied by undersowing a legume shortly after sowing. Retarding the growth of annual weeds is considered an additional benefit of using cover crops. However, studies on the influence of undersown cover crops on the growth of perennial weeds are lacking. In this paper we present data from a four- year field experiment on the growth of Cirsium arvense (L.) Scop., Sonchus arvensis L. and Elymus repens (L.) Gould., in cereals with and without undersown red clover (Trifolium pratense L.), combined with contrasting stubble treatments after harvest. Clover did not significantly reduce the growth of any of the weed species. Regression analyses showed, however, that the growth of C. arvense and S. arvensis increased with increasing clover biomass at low densities of clover, whereas at higher densities it decreased with increasing biomass of clover. Amongst the stubble treatments, shallow ploughing followed by harrowing gave the best control of all weed species. The effect was most pronounced on E. repens, and least on S. arvensis, for whichneither the number nor the weed biomass were significantly different from the untreated control. Rotary tilling gave a similar effect, but again less pronounced on S. arvensis. Mowing suppressed E. repens to some degree, tended to suppress S. arvensis (n.s.) but had no effect on C. arvense. Thegrowth and survival of seed-propagated plants of the same species were studied in a one-year field experiment and in a greenhouse experiment, the latter only including the species S. arvensis andC. arvense. The use of a cover crop reduced the number of leaves per plant in S. arvensis both in the field and in the greenhouse. The same effect was found for C. arvense, but only in the greenhouse experiment. In the latter, above-ground biomass of the cover crop explained 67 % of the variation intotal biomass of S. arvensis and 47 % of that for C. arvense. From a practical point of view, the study has shown that undersown red clover has only marginal effects on perennial weeds, in contrast to various stubble treatments which influence strongly on weed growth. In general, soil tillagesuppresses perennial weeds best, but mowing may be a more environmentally friendly alternative for some weed species, such as. E. repens.

The objective of the ongoing study is to obtain new knowledge to provide a fundament for improving weed harrowing in organic cereal production as well as optimising weed harrowing as an alternative for herbicides in conventional farming. Results from field experiments on three locations during three years will be presented and discussed. The experiments included the factors: a) different manufactures of spring tine weed harrows, type of tines and used with different aggressiveness (adjusted through tine working depth and speed); b) cereal developmental stages; and c) soil types (locations) and conditions as well as weed infestation levels. The project included new experimental equipment including a specially constructed 1.5 meter wide harrow, which made it possible to treat many small sub-plots. Cereal yield and quality, number and dry matter weight (biomass) of weeds, and soil water content, soil share strength, and soil penetration resistance were recorded. The resulting intensity of the harrowing operation was measured using digital pictures taken before and after harrowing to give an estimate of cereal coverage of the soil. Pre-emergence harrowing and harrowing at early 1-leaf crop stage reduced in general weed number and biomass compared to untreated control. The mean weed reduction over locations and years was about 40%, but this reduction was not always significant different to control plots. In one year, harrowing at those early stages gave an increase in weed number and biomass, presumably because of rainy weather after harrowing. In general, pre-emergence harrowing and harrowing at early 1-leaf stage increased crop yield compared to untreated, but harrowing at such stages occasionally also resulted in small yield reductions. We conclude, however, that this early harrowing should be carried out every year. Weed harrowing once, either at 2 or 3-4 crop leaf stages, also gave decreased weed number and biomass, but no clear influence on cereal yield. Therefore, harrowing at these late stages is an opportunity, if weather conditions do not allow weed harrowing at earlier stages. The combination of pre-emergence harrowing and harrowing at 3-4 leaf stage gave a significant reduction of weed number and biomass compared to untreated control. In general, harrowing twice gave increased crop yields, but the differences were only significant at one of the locations. The potential benefit of a second harrowing at the 3-4 leaf stage depends on the weed situation, number and biomass, as well as crop competitiveness. Our results have indicated that the threshold for weed harrowing may be around 300 annual weeds m-2, but more knowledge is needed for verifying the level of total number and species. If the number of weeds is less, weed harrowing twice gives a significant reduction in weed number, but not an increase in yield compared to only one weed harrowing at an early growth stage. Furthermore, our results indicate that the different types of harrows and tines will not work properly on all soil types. On light soils, all of them gave satisfying results. However, a normal tine (" 7mm bent Einböck or a " 10mm long straight CMN) is not rigid enough on soil types that build a soil crust after rain. An " 8mm bend Einböck tine, however, was better at breaking a soil crust and thereby improve cereal plant emergence on such soils. On the other hand, it is important not to adjust such tines too aggressive when no crust is present. Another trial showed that a straight tine will pick up less stones on stony soils than a bent one will do, stones which might damage the combiner during combining. Our results from one of the locations (medium light soil with stones) showed that yield as well as reductions in weed number or biomass m-2 was not affected by tine type. 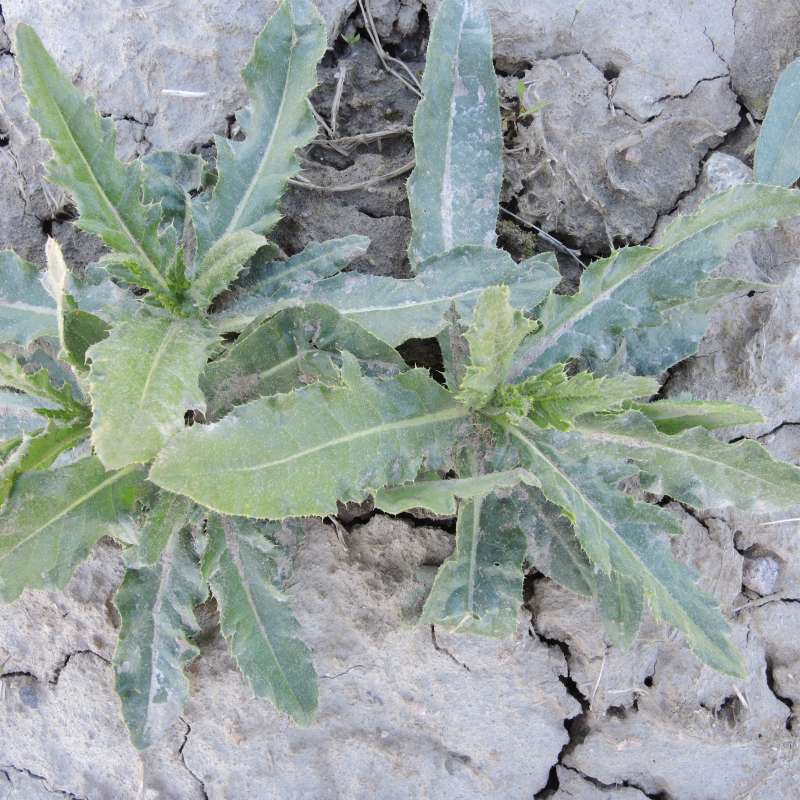 AC/DC-weeds: Applying and Combining Disturbance and Competition for an agro-ecological management of creeping perennial weeds